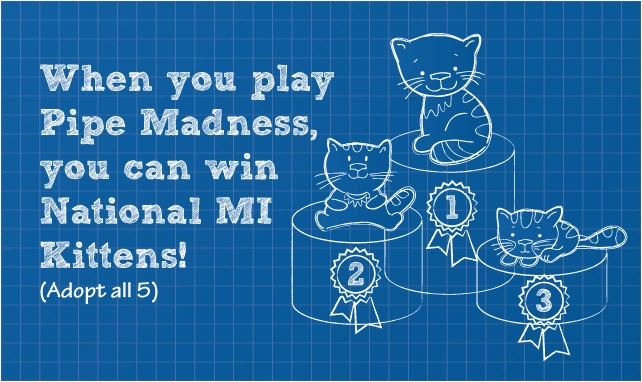 Our Kittens are Here!

Pipe Madness 2 is about to get underway, and if you liked the puppies, you’ll be sure to like the National MI kittens. Each week we’ll post the Top 10 winners and show you the next weeks’ kitten prize.

Help the National MI kittens break the internet.  Join us on the Pipe Madness Facebook page to share your kitten and cat adoption stories, post funny anecdotes, or just join the conversation.

Play the game, and you could win!

Who can play? The game is intended to provide mortgage insurance education and fun for mortgage professionals (who are over 18 and reside in the U.S.).  Forward the game link to your colleagues and encourage them to play too.  There is no cost to participate. National MI will award promotional prizes, in its sole discretion, based generally on participation and game scores.  All decisions by National MI regarding timing, frequency and prize awards are final.  The game can be played multiple times, but National MI reserves the right to limit prize package to one per person. National MI has the right to discontinue the availability of the game (and prizes) at any time without notice.

Have questions?
Contact Us or find your nearest Sales Advisor.

Built with our Customer in Mind

Quoting Mortgage Insurance is a Snap